UCU is currently in dispute with employers to prevent the further erosion of our pay and working conditions and to fight for equality (Four Fights), and to protect our USS pensions against severe cuts.

Colleagues at 68 institutions across the country, including Oxford Brookes, will begin the next round of strikes from Monday 14th February (for USS) and Monday 21st February (for Four Fights).

Employees of the University of Oxford are currently prevented from taking industrial action by the Trade Union Act 2016 because, despite over 75% of votes being in favour of industrial action, the branch narrowly missed the threshold to take action during the recent ballots. UCU has a national Fighting Fund which is used to compensate members for pay withheld during industrial action.

To support our colleagues across the country who will be taking industrial action in the coming weeks and to ensure a positive outcome from the disputes, Oxford UCU is:

Two years ago on this day, after the walkout of congregation and against a backdrop of national #UCUstrikes on USS pensions, the VC of @UniofOxford acknowledged the depth of feeling around pensions and reversed the University’s position on the detrimental changes to pensions 1/n 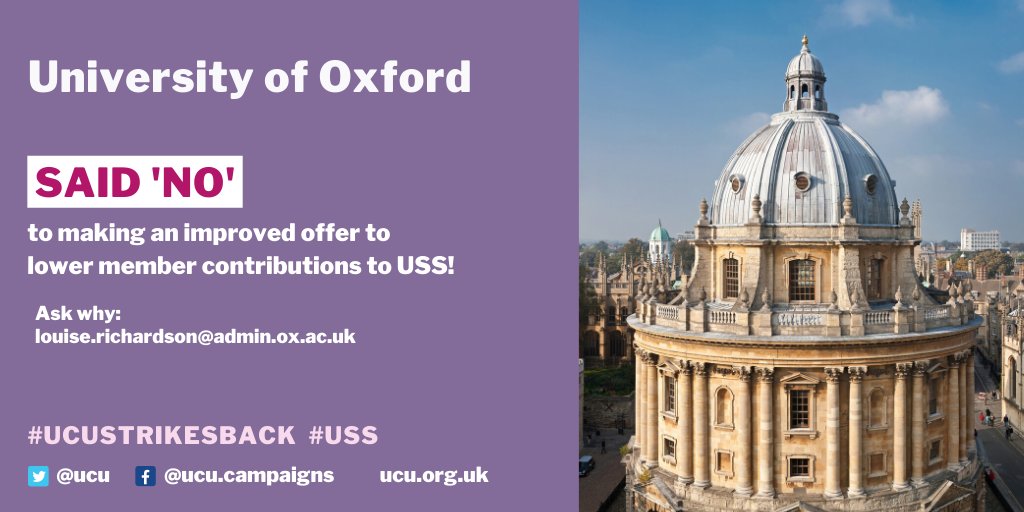 Shortly after, the UCU dispute was settled nationally, putting off the change from DB to DC pensions, and agreeing to the formation of the joint expert panel 2/n

What has happened since locally in Oxford? Council, the body responsible for the administration of the University and for the management of its finances and assets, resolved to protect staff pensions 3/n

Specifically, council committed to seek to provide pension provision for USS members employed by the University that is of the same standard as currently available, subject to the duties of the Council, as a trustee body, to serve the interests of the University as a whole 4/n

Sounds good. But what next? In October 2018, Council re-examined this commitment, and decided that ‘pensions of the same standard’ meant simply that staff would get DB pensions; even if the cost were to increase 5/n

Moving forward to the current dispute; UCU is striking again nationally over pensions. The position of the University of Oxford in this dispute has, until very recently, been unclear 6/n

Oxford UCU wrote to the VC on the 13th of February asking for an improved offer on USS, to avoid further strike action 7/n

We never heard back. But we have learned the position of council, and it is to not offer any more money to settle the dispute 8/n

This is where we are; back to the past, unfortunately. The historic walkout of congregation at @UniofOxford and its consequences have now largely been reversed 9/n

We urge everyone at @UniofOxford to get involved, so that this position is reversed. Other large and influential Universities in the UK are doing so. We do not see why ours cannot 10/n

We would strongly like to encourage all members to complete the USS pensions consultation. The consultation closes on Friday 2 November at 5pm.

This consultation is a rare opportunity for us to communicate directly with USS. All our responses also go in parallel to Oxford’s Personnel Services.

Is it worth responding?

Definitely! Though we might wonder if our responses can make any difference, USS and the University of Oxford are legally obliged to consider our responses. In addition, as we saw during the Congregation vote taken outside the Sheldonian, the moral weight of many of us speaking for our pensions can create decisive turning points. So please do respond, if you haven’t yet.

Here is: where to find the consultation, our branch recommendation on how to respond and a summary of recent developments on USS.

How can I complete the consultation?

To log in, you will need: (1) your USS member number and (2) your National Insurance number. You can find your USS number on USS materials posted to you, like the “2018 annual member statement” a few weeks back. Otherwise, phone USS on 0333 300 1043 and ask them for it (they will need: your NI number, name, date of birth and postal address).

You can find your National Insurance number on your University payslip, at top left.

How does Oxford UCU recommend that we respond?

In brief: this consultation is about increased contributions (see this post for details). However, the need for increased salary contributions has been undermined by two recent developments. Firstly, the Joint Expert Panel’s report in September called into question USS’ 2017 valuation. The JEP says our current benefits can be afforded with a much smaller increase in contributions.

Then, 10 days ago, Sam Marsh, national pensions negotiator for UCU, revealed that using USS’ own data, the Scheme is in fact projected to have a large surplus, with no need for contribution increases, if funds are not moved prematurely into lower-return investments. The design of the valuation itself causes a future deficit. This discovery was important enough to be reported in the Financial Times.

In this light, we view this consultation as flawed and recommend that you respond using this easy-to-use template response prepared by USSbriefs and signed by a range of UCU pensions experts and committee members.

If you have time to adapt this and respond in your own words, that is even better. However you feel, the most important thing is to respond, so that both USS and the University know how we collectively feel about developments on USS.

As quite a bit has happened on USS since our strike, for a summary of pensions developments and why we’re recommending this response, please see our earlier post USS: where are we now?

If you have any questions about this, please let us know.

A great deal has happened with USS since our strike. Here is a big catch up post on pensions.

We went on strike against the proposal to downgrade our pensions to Defined Contributions only. Our action successfully took this proposal off the table. But the situation is still not settled, so it is probably most accurate to say: we have won a reprieve for Defined Benefits but still must remain vigilant.

The agreement which ended the strike set in motion two parallel processes:

How do the contribution increases and JEP interact?

Our best understanding is: we can view the contribution increases as a process that will begin, then be overtaken at some point by changes coming out of the JEP report.

Let’s start by looking at the contribution increases in more detail, then come back to the JEP report outcomes and more recent developments.

USS has proposed phasing the contribution increases in three steps, so that they start smaller, then go up. USS hopes this will give time for UCU and Universities UK to reach a new agreement based on the Joint Expert Panel report, before the largest increases take effect.

Here are the amounts and timings of the increases:

Why are the contribution increases proceeding, despite the JEP report?

Many will wonder why USS is forging ahead to implement these changes, when the Joint Expert Panel has just reported.

What did the JEP report say?

In brief: the JEP report unanimously vindicates UCU’s position: the November 2017 valuation is unnecessarily pessimistic about the health of our Scheme. The report also criticises Universities UK for the way they consult university management teams, as rushed and poorly framed (at the very least). It criticises USS management for excessive prudence, the design of the valuation (especially Test 1), unclear communications and for always prioritising listening to employers over listening to us, the beneficiaries of the Scheme.

Specifically on the question of benefits and contribution levels, the JEP recommended: by making selected adjustments within the scope of the 2017 valuation, our current benefits can be maintained unchanged, with a much smaller increase.

The JEP recommends that a total contribution of 29.18% is sufficient to maintain current benefits (29.18% total from both employees and employers). This is an increase of 3.18% compared to today’s total of 26%, but much less than the total of 36.6% asserted by USS executives.

This is very important for us to know: there is no rule about how this 3.18% increase should be split. The 35 : 65 cost sharing ratio is only mandatory in cases where there is no agreement between UUK and UCU. Changes following the JEP report will be negotiated between UUK and UCU. This will be a new agreement and therefore the attribution of the 3.18% is to be negotiated. There is no automatic ratio in this case.

I heard there were new findings about the valuation in the last two weeks?

Yes: Dr Sam Marsh, a UCU elected national negotiator for pensions and president of Sheffield UCU, has obtained cash flow data from USS. Unlike USS, who do not make use of projected asset growth in the valuation, but rather set future asset values by assumption, Sam Marsh’s calculations reveal:

These are explosive findings indeed. To find out more, please read:

So what outcomes do we expect?

What is clear in the short term is that the April 2019 contribution increases will happen, simply because there is not enough time to finalise a new agreement before then. So as USS members, our contributions will go up from 8% of salary now to 8.8% in April.

Beyond April, it is a bit harder to say. We know that UCU and UUK will be working towards a new agreement this autumn, based on the JEP report. Depending on how soon agreement can be reached, it is possible that a new agreement will supersede the October 2019 increases, and this is certainly to be hoped.

Overall: the JEP report and now Sam Marsh’s conclusions have considerably strengthened UCU’s hand. We can’t stand down from vigilance, but there is ever more light ahead. We will post new updates (now that we have this blog!) as more information becomes available.

What can I do personally?

Respond to the current USS consultation! Oxford UCU recommends starting from this easy-to-use template response prepared by USSbriefs and signed by a range of UCU pensions experts and committee members.

Your response will have the most weight if you can make it by Sunday 28 October, but in any case, do respond before 5pm on Friday 2 November when the consultation closes.

Please see our recent e-mail or this post: Influence USS via the consultation for full details.